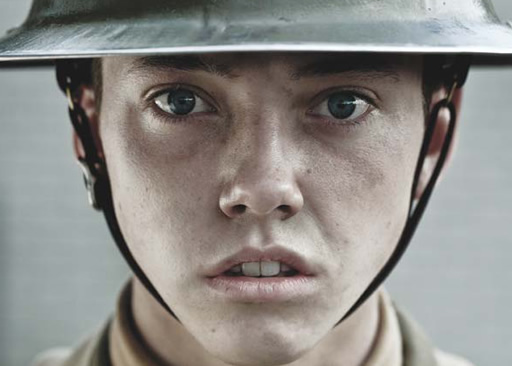 “What passing-bells for these who die as cattle?” lamented Wilfred Owen in his Anthem for Doomed Youth. When RC Sherriff wrote his play Journey’s End just a decade after the Great War, he never set out to answer this haunting question or justify what he had witnessed at Passchendaele. But he was the first to bring the horrors of trench warfare to the stage, and by so doing he spawned a genre that would be satirised and appear a generation later as Oh, What a Lovely War!, and a generation after that as Blackadder Goes Forth. With their “simply topping” humour, “ra-ther” eccentricity, and “thanks most awfully” irony, they serve to remind us of the futility of war: they ensure that we will remember.

The original 1928 production of Journey’s End at the Apollo Theatre not only launched the career of an unknown, 21-year-old actor called Laurence Olivier; it also introduced the world Sherriff, who would go on to write screenplays for such cinema classics as The Invisible Man (1933), Goodbye, Mr Chips (1933, for which he received an Oscar nomination), The Four Feathers (1938), Lady Hamilton (1941) and The Dam Busters (1955). This latest production at the Duke of York’s Theatre is a revival of David Grindley’s 2004 staging and runs only until 3rd September, after which it tours the UK. And I have to tell you, it’s funny, heartbreaking and utterly unmissable.

Grindley’s bunker is an intense, claustrophobic darkness, in which the only constant is the dim flicker of a slow-burning candle on a wooden table, around which the officers spend the first half of the play eating breakfast, lunch and dinner. The smell of bacon lingers, the tea tastes of onions, the cutlets won’t cut, and the soup is yellow and tasteless. The battalion is commanded by Captain Stanhope (James Norton), who was three years above his school friend 2nd Lieutenant Raleigh (Graham Butler). Raleigh idolises Stanhope and asks a family contact to arrange a posting to his hero’s company, not understanding that war isn’t quite the same as a game of rugger. Stanhope is now on the edge of a breakdown, his nerves frayed, and whisky his best friend. Butler is excellent as the embodiment of youthful innocence: his performance is endearing. Norton is just a year out of RADA, and I rather think this production will do for him what the 1928 staging did for Olivier: he has an engaging charisma, a formidable vocal power, and an emotional range that moves effortlessly between psychotic tantrum and tender sensitivity.

As we await the coming of the Hun on Thursday morning, we spend the preceding three days in the company of these men. Stanhope not only constantly berates Raleigh; he aggravates Captain Hardy (Tim Chipping), Lieutenant Osborne (Dominic Mafham), 2nd lieutenant Trotter (Christian Patterson) and the cowardly Hibbert (Simon Harrison), who desperately hopes his (feigned) neuralgia is a ‘Blighty one’. They pass the time reading (a little), eating (quite a bit), and earwig racing (they go faster when dipped in whisky). We see the sit-com cook, Mason (Tony Turner), come and go like the karma chameleon, providing much of the Baldrick light relief with his “cunning plan” cooking. As Stanhope becomes increasingly bitter, remote and unstable, it is former schoolmaster Osborne, the company ‘Uncle’, who provides the maturity and stability to sustain morale and take Raleigh under his wing. Mafham is superb in this role: he gives a classic British war film performance redolent of the stiff upper lips of Kenneth More, Jack Hawkins, and John Mills.

In all the levity and humour there’s rarely an expression of hope or optimism. And when there is, it’s never quite believed. There is a pervasive sense of an inescapable fate: as they trudge around their muddy hovel, you just know that this is where they will all die. And because Grindley has so brilliantly distilled the decency and truth of Sherriff’s script, we grow to care deeply about these men over the course of just a few hours, so much so that the end, when it comes, is devastating. You soon understand why people called this “The War to end all Wars”.

I bumped in to the Telegraph and Spectator’s Charles Spencer during the interval, and he summed up the whole experience as “deeply moving”. And it is. As a crescendo of mortar shells, minis, grenades and bullets reach their harrowing climax, you know in the blackness that everyone is bombed to kingdom come. The lights come up, and as you choke back the tears you see a montage of war heroes bathed in a blinding white light, red poppies on their lapels. You don’t want to clap: the only reverent response is to stand, bow your head, and pause for a minute’s silence. But then someone starts the customary applause, and everyone else follows. There are no encores, no bows, and no prolonged curtain call: just a deep feeling of profound sorrow.

No words are really adequate to describe the experience. If the Cenotaph is an enduring monument to the fallen, Journey’s End is a heartfelt tribute to their immortal memory. You will laugh and you will cry. And you will appreciate a little more on Remembrance Sunday that those names now carved in stone once lived, loved, and laughed, just like you and me.