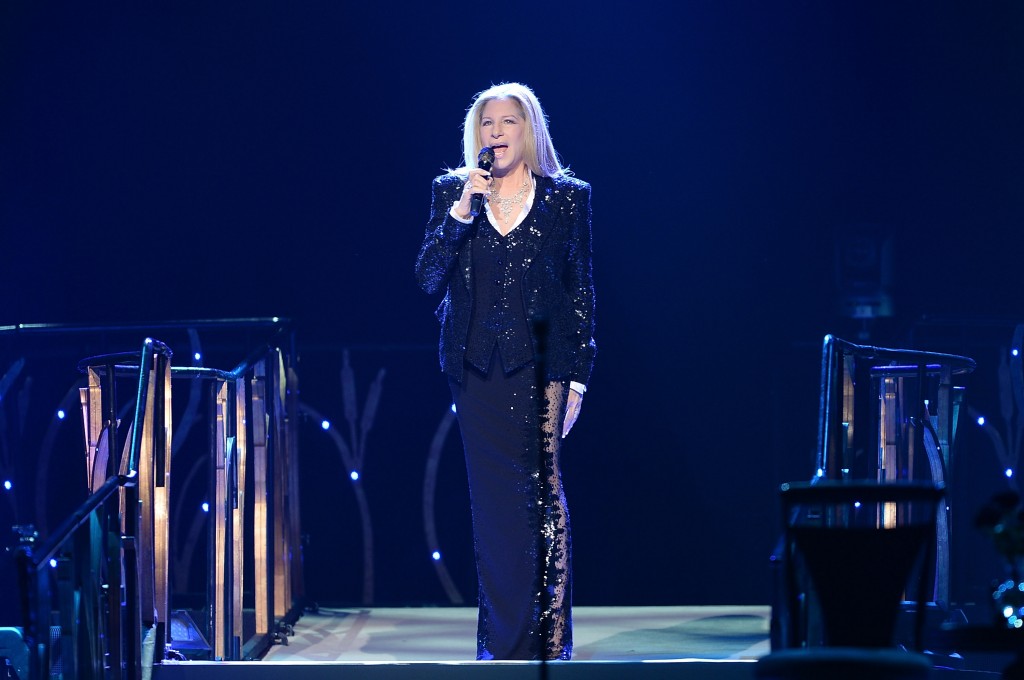 She is the stuff of legend – still bewitching and beguiling at the vintage age of 71 (not that she looks or sounds it). Barbra Streisand has won a couple of Oscars, a Tony, an Emmy, a Golden Globe and been awarded France’s Legion d’Honneur. She has Grammies galore, with 51 gold, 30 platinum and 13 multi-platinum albums to her illustrious name. She even has an ‘effect’ named after her, which must be the showbiz equivalent of a political ‘-ism’. So it was no surprise that she got a standing ovation the moment she ascended the stage on a lift (not out of geriatric necessity).

The warm-up act had been slide-show extracts from the family album, showing the black-and-white baby Barbra of Brooklyn slowly becoming the Technicolor Hollywood legend. As that enigmatically sculptured face gradually morphed out of infant obscurity, the crowd was whipping itself up into a polite fluster. The moment she appeared, without humming so much as a semi-quaver, she was bathed in waves of glorification from an ocean of adoring fans. I had sat next to two of them for an hour in Wagamama’s beforehand: they follow her all over the world, and had paid the best part of £500 (each) for their seats. I balked at £25 for the programme (which didn’t even contain the setlist).

I can’t deny that the evening had some glorious moments of lushness. There were warm and worthy tributes to Sinatra and Judy Garland (more slide-show), with a cheesy Jule Styne mash-up and an intimate journey through a life of tears and joys. Some of the songs were annoyingly truncated, but that velvety voice accompanied by a 60-piece orchestra had an immense reach and intense emotional connection. There were old songs (‘Evergreen’; ‘On a Clear Day’), great songs (‘Smile’; ‘The Way We Were’) and weird songs (‘Let Our Garden Grow’). Sometimes she soared, and then she sighed. She was candid and earnest, then gossipy and flippant. There was awesomeness and a few teary moments. She inspires without effort: every word is felt; every note charged with passion and sincerity.

But the evening was less a concert with the cosmic Barbra Streisand, and more an audience with Barbra and her sister Rozzie and her son Jason (more slide-show family album) and her jazz-trumpeter-friend Chris Botti and his violinist-mate Caroline Campbell along with Ryan Molloy from Jersey Boys (why?) and a huge choir that appeared out of nowhere just for the finale. I’m not denying they’re all talented to various oscillating ear-piercing degrees, but the rhythm of the evening was lost very early on. If we’d been at the Palladium, it wouldn’t have been out of place on a Sunday Night.

The music very quickly became incidental to the therapeutic sermon and a seemingly endless monologue of family adoration, every word of which was scripted on autocue. It wasn’t quite the Osmonds at Christmas (they could at least act spontaneous), but there were moments I half-expected her husband James Brolin to appear onstage and lead the venerating throng in a chorus of ‘Edelweiss’. Indeed, I got the feeling the show had been devised and directed by a postulant nun – devout and well-intentioned, no doubt, but hopelessly constrained by liturgy. There were leitmotifs of spiritual counselling, ecological guidance and psychological consolation throughout.

I genuinely have no idea why any music producer would employ a 100-strong choir and hide them in the green room for three hours until the very last number. I’d been staring up at the lighting rig for a while – mainly during the duets with son Jason and his solo ‘Morning Prayer’ dirge – but when Bernstein’s ‘Let Our Garden Grow’ was turned into a cultic anthem against global-warming, nuclear disarmament and seal-culling, I was shuffling to escape.

But the fans were happy, and I suppose that’s all that matters. No, scratch that: they weren’t happy, they were ecstatic – it was, for them, an evening of joy and rapture. I guess I’m just not as much of an admirer as I thought I was. Or maybe I knew another Barbra from a different world in another time, and these sorts of gigs are for the hardened, card-carrying believers and fully-signed-up members of the fan-club chat forum.

At the very least, ‘Barbra Streisand Live’ cries out for a gutsy reprise of ‘Don’t Rain on My Parade’ from Funny Girl, or a guest appearance by Michael Crawford with ‘Put on Your Sunday Clothes’ from Hello Dolly. But it ended in schmaltzy mush and three random lines from West Side Story. ‘Somehow, some day, somewhere’ got her devoted audience to its feet, but I was not left wanting more.