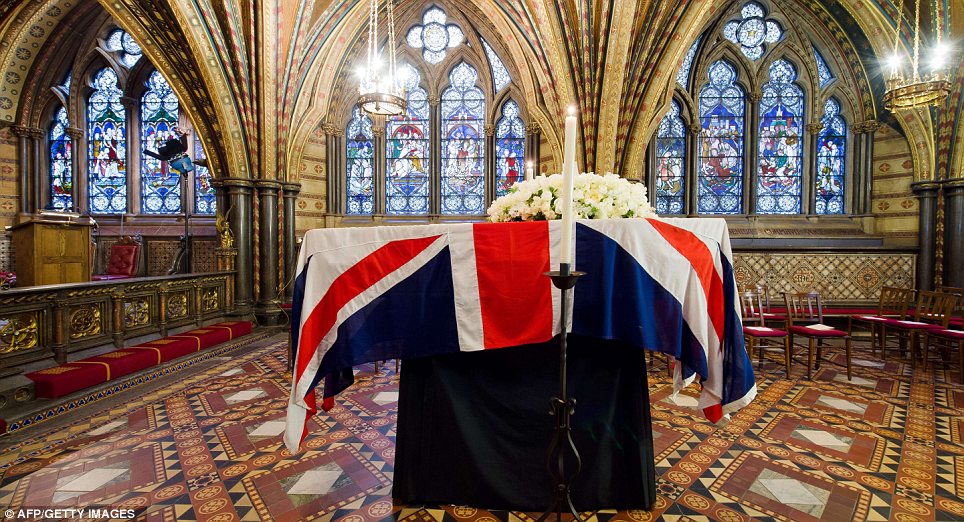 Emmeline Pankhurst looked on, smiling at the fulfilment of her revolution. Nelson and the proud lions of Trafalgar joined in the homage – with spontaneous applause from the thousands who lined the streets to honour the longest-serving prime minister of the 20th century. She was, by popular consent, the greatest of our post-war leaders: after Churchill, the most remarkable and heroic of this second Elizabethan age. An intimate service in a Grantham chapel would have left the world asking: “What ceremony else?” So, black horses, a 1.5 ton gun carriage, cathedral bells, the insignia of the Armed Forces and the Queen herself all joined together in tribute to The Lady. Anything less would have shamed the nation.

The funeral service itself was an act of prayerful worship to God; not a thanksgiving with half-a-dozen eulogies glorifying man. The music, hymns, poetry and scriptures reflected her essential character and the core of her Christian conviction. The foundation of her Conservatism was English and Methodist. Certainly, she migrated in her later years toward Anglicanism, but John and Charles Wesley themselves never ceased being so. There is in the Church of England a form of worship, a depth and breadth of theology and a seriousness of moral reflection which coheres with the essential culture of England. Margaret Thatcher came to find this very much to her liking.

The Order of Service was framed by two poems. It was prefaced with extracts of Eliot’s ‘Little Gidding’ from his Four Quartets, and the epilogue was Wordsworth’s ode ‘Intimations of Immortality’ from his Recollections of Early Childhood. Here we glimpse the nuances of Margaret Thatcher’s spirituality: Eliot tells us that beginnings and endings are wrapped together in concentric circles of meaning. The dead in eternity meet the living bound by time: the spiritual and political combine. Our ancestors and past traditions still exist, and to be human is to be subject to history. It is not simply the past: it is “now and England”. Wordsworth tells us of a faded glory: while grief may intrude upon the natural joy of spring, human life is merely “a sleep and a forgetting” – there is a purer pre-existence before we are born on earth.

The music began with the psalms, adagios, toccatas and allegros of John Ireland, Herbert Howells, Edward Elgar, Frank Bridge, Charles Villiers Stanford, Hubert Parry and Ralph Vaughan Williams. It was all quintessentially English and thoroughly Anglican. As the coffin processed through the Nave, salvation was proclaimed. And that salvation is resolutely by faith, according to the majesty and splendour of the Authorised Version: “I am the resurrection and the life…”; “I know that my Redeemer liveth…”; “We brought nothing into this world…”.

The hymns were not only a reflection of Margaret Thatcher’s personal walk with God; they seemed to contain the leitmotifs of a decade of conference speeches. John Bunyan’s ‘To be a Pilgrim’ is about tenacity, constancy and endurance through adversity. You could hear echoes of the Brighton Bomb in “’gainst all disaster”; her defeat of Soviet Communism, Trade Union power and General Galtieri in “though he with giants fight”; and the ultimate betrayal by her friends in “no foes shall stay his might”. She ultimately proved herself better than all of them.

Her first chosen Scripture reflected something of her political soteriology: Paul’s Epistle to the Ephesians presents a Manichean view of the eternal battle between good and evil, which she once explained to a journalist was why she entered politics. She puts on the Armour of God – her loins are girt with truth; her breastplate is righteousness; her shield is faith – to contend against the wiles of the devil (Socialism); the wickedness in high places (her Cabinet); and in the principalities and powers (Argentina, European Union and the National Union of Mineworkers).

She didn’t choose David Cameron to read from St John’s Gospel: the role would have fallen to whoever was prime minister at the time of her passing. And it felt a little incongruous to hear such a bold, uncompromising assertion of the uniqueness of salvation by Christ alone from someone whose faith “fades in and out like Magic FM in the Chilterns”, as he once told us. “I am the way, the truth and the life,” the Prime Minister intoned. Except that, unlike her, he doesn’t quite believe all those definite articles. In the Thatcher theodicy, salvation is to be found in the moral absolutes of Judaeo-Christian precepts: for the Cameroons, it lies in multi-faith, ecumenical, Buddhist-Muslim-Sikh-Hindu syncretised moral relativism. She was saved by faith in Christ: he by sincerity and well-meaning. But you have to be a good actor to convince people that you mean what you don’t quite believe.

‘How lovely is thy dwelling place, O Lord of Hosts!’ is Brahms’ a setting of Psalm 84 from his German Requiem. We return to the roots of the Protestant Reformation: Luther was Brahms’ inspiration, and so Sola Scriptura supplants ritual and liturgy. This was not music for the dead, but comfort for those who mourn. Margaret Thatcher is in the Lord’s dwelling place: there is no need to weep or pray for her soul: she is at peace and sees face-to-face.

The Address by the Bishop of London was a perfectly judged and quite moving account of the interplay between her faith and politics. He took us from Methodism to her understanding of interdependent civic virtue. And he set to rest once and for all the warped misinformation surrounding her understanding of society. The Bishop clearly grasped and understood her philosophy, which was not the rabid individualism of the Socialist caricature: “We cannot achieve a compassionate society simply by passing new laws and appointing more staff to administer them,” he explained succinctly, with a nod to sound money and civil service cuts. This was a bishop who knew and admired her – the sort of Anglican cleric the media tend to ignore when they seek to denigrate the Established Church or confect a church-state row. And he reminded us that death is the great leveller: all that lives must die.

It is fitting that a funeral service so grounded on the Authorised Version of the Bible should also use the Book of Common Prayer (1662). None of those wishy-washy, milky translations will do when the red meat of Shakespeare’s English is freely available. “Man that is born of a woman hath but a short time to live, and is full of misery. He cometh up, and is cut down, like a flower; he fleeth as it were a shadow, and never continueth in one stay.” And with that we segue into the sublime ‘In Paradisum’ from Fauré’s Requiem. I doubt there was any purposeful nod to the French or the Germans in the choice of these anthems: they are simply exquisite settings, with Fauré’s perhaps being the closest we may get to a musical portrait of paradise.

The third hymn, ‘I vow to thee, my country’, reverberates through the beating heart of every proud and patriotic Englishman and woman. To the tune of ‘Jupiter’ from Holst’s The Planets, it vies with Parry’s ‘Jerusalem’ to be England’s national anthem. It has all the patriotic fervour of a ‘Last Night of the Proms’, and the words draw on the political themes and spiritual tensions of Augustine’s City of God. The hymn clearly meant a lot to her. She quoted from it in her 1988 speech to the General Assembly of the Church of Scotland:

“I always think that the whole debate about the Church and the State has never yielded anything comparable in insight to that beautiful hymn ‘I Vow to Thee my Country’. It begins with a triumphant assertion of what might be described as secular patriotism, a noble thing indeed in a country like ours: ‘I vow to thee my country all earthly things above; entire, whole and perfect the service of my love.’ It goes on to speak of ‘another country I heard of long ago’ whose King can’t be seen and whose armies can’t be counted, but ‘soul by soul and silently her shining bounds increase’. Not group by group, or party by party, or even church by church – but soul by soul – and each one counts.”

Her theme is consistent: we are back to those individual souls who make up hard-working families who freely associate to form the communities which constitute a true society.

The Bishop of London then commended Margaret Thatcher to God the Father who created her, and to the Son who redeemed her, by the Holy Spirit, who called her. “Go forth upon thy journey from this world O Christian soul”, and ascend to the New Jerusalem. And then the Archbishop of Canterbury prayed that we might be supported through this “troublous life”, and blessed this day and always:

“Lord, now lettest thou thy servant depart in peace: according to thy word.
For mine eyes have seen: thy salvation,
Which thou hast prepared: before the face of all people;
To be a light to lighten the Gentiles: and to be the glory of thy people Israel.”

Cranmer’s words were lost in Elgar’s glorious ‘Nimrod’. There is nothing more Anglican than the Book of Common Prayer, and perhaps no piece of music more English than ‘Nimrod’ from the Enigma Variations. All that was perhaps missing was a line or two of Shakespeare. But Dan Hannan provided those at the Pavilion End tribute by The Freedom Association afterwards:

“When that this body did contain a spirit,
A kingdom for it was too small a bound;
But now two paces of the vilest earth
Is room enough.”

Margaret Thatcher’s final political conference was Conservative, Christian and deeply spiritual. It expressed grandeur beyond mere policy and jingoism. It was the
embodiment of her merits and a reflection of those virtues of hers which continue to inspire others toward loyalty, service and devotion. The Lady was a commanding
personality and a force of nature. Just as she has left an everlasting impression upon the national psyche, this funeral service will justifiably echo down the centuries to tell future generations of her greatness.

Thank you, Lady Thatcher, for reminding us of where we came from, who we are, and what we can be.