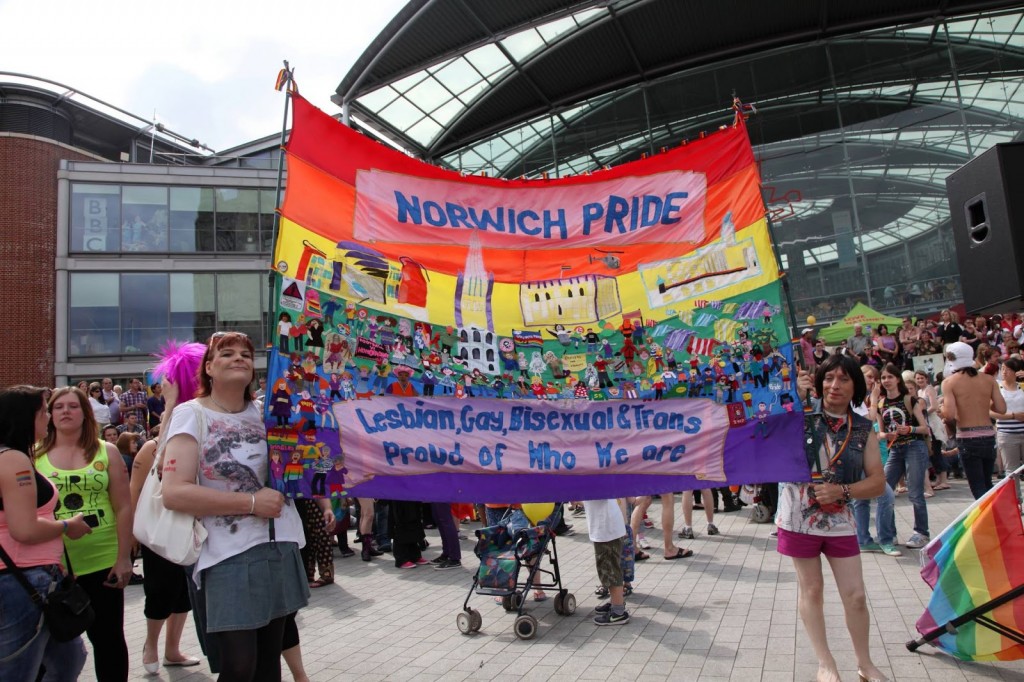 You’re at home, enjoying a summery Saturday afternoon with the bees and nasturtiums on the patio, when the doorbell intrudes. You’re greeted by an impeccably courteous, fresh-faced police officer from the Norfolk Constabulary – ‘Dedicated to this neighbourhood’, according to their website – and he’s come to speak to you because there’s been a complaint.

Not, you understand, about the troubling number of burglaries, rising car thefts, incidences of property vandalism or madhouse music accompanying balmy barbeques. No, someone has reported you for sending them two gospel tracts by email, one entitled ‘Christ Can Cure – Good News for Gays’; and the other ‘Jesus Christ – the Saviour we all need’. Some people might have simply deleted them both and directed all further correspondence from you to ‘spam’, but these people got offended. Very offended. The allegation against you is that of ‘homophobic hate’.

The officer politely offers you a choice: you can either admit your guilt there and then, accepting an on-the-spot fine of £90. Or you can contest the allegation, provide a signed statement in your defence, after which it will be for a senior police officer to decide whether or not to refer your case to the Crown Prosecution Service.

It is not clear at this stage upon what basis the police have judged the tracts to be ‘homophobic’. But it is made crystal clear that you may have committed a homophobic crime, having communicated by electronic means something likely to annoy or cause offence. You are the subject of a criminal investigation.

This was the scenario which confronted the Revd Dr Alan Clifford, Pastor of the Norwich Reformed Church, the weekend before last. In theory, he could have declined the fine and refused to provide a statement, but Dr Clifford is a helpful and accommodating sort of chap. So, at 5.45pm on 17 August 2013, instead of settling down in front of the telly, he set about responding to a series of probing questions.

I have met Alan Clifford on a few occasions at various conferences: he is intelligent, educated and thoughtful. I don’t agree with his view of Islam (he says it is ‘evil’), and I’m not personally a fan of placards and tracts as a means of doing Christian mission. But his zeal for the gospel is burning and passionate: he believes every word of God’s plan for mankind and means every assurance he preaches. When he talks of healing, it is the sort that only God can bring to the sickness of the soul: an unavoidable surgery and lifetime of convalescence leading to eternal salvation. You may not approve of his medium or message, but ‘hate’ is as far from his essence as shade is from the surface of the sun.

Dr Clifford says he was not permitted to make a copy of his statement, so the precise details of his interrogation may not be exactly as recounted. But he recalls being asked why he had sent the e-mail in the first place – whether it was purposely to annoy or cause offence to the recipient(s). He responded: ‘No. I was reporting to the gay-pride people our Christian complaint against the public display of their homosexual propaganda, which we find offensive.’

In the hierarchy of competing rights, of course, offence is a one-way chase. He was then asked if he was aware that he’d actually committed a homophobic offence as defined by the official police leaflet which the officer then presented to him. It apparently defined such an offence as ‘any incident which is perceived to be homophobic by the victim or any other person’.

Dr Clifford patiently refuted the accusation, explaining pedantically (as a doctor of theology might) that the meaning of ‘homophobia’ stems from the Greek ‘phobia’, meaning ‘fear’, and does not embrace hatred. Whilst acknowledging the changing vernacular usage, he explained: ‘I certainly fear the influence of homosexuality on society, but this should not be regarded as “hatred” unless criticism is taken to mean “hatred”.’

He pointed out to the officer that his tract was actually subtitled ‘A Compassionate call to Christian Conversion’, and asked: ‘Is that hatred? We don’t hate these people. We love them and want to help them. So, even though the gay-pride people are upset, we are guilty of no crime.’

But the Norfolk Constabulary don’t seem to go for homophobia gift-wrapped in compassion: they had, it seems, already determined Dr Clifford’s guilt on the basis of a complaint by someone at Norwich Pride, hence the immediate offer of a £90 fine to make it all go away. This is speed-camera homophobia: capture an image of the incident; pay a reduced fixed penalty now; or dare to defend yourself in protracted court proceedings which might result in a greater fine and/or even a custodial sentence.

Dr Clifford helpfully explained the law to the police officer, pointing out that the European Court of Human Rights, in Handyside v UK (1976), made it clear that freedom of expression embraces not only information and ideas that are favourably received or regarded as inoffensive, but also, ‘those that offend, shock or disturb the state or any sector of the population. Such are the demands of that pluralism, tolerance and broadmindedness without which there is no democratic society’.

But that didn’t wash either. Since Dr Clifford felt he was effectively in the dock, a little more case law was adduced by the defence: Lord Justice Sedley, in Redmond Bate v DPP (2000), famously said that, ‘Free speech includes not only the inoffensive, but the irritating, the contentious, the eccentric, the heretical, the unwelcome and provocative provided that it does not tend to violence. Freedom only to speak inoffensively is not worth having’.

Both European law and the English common Law establish by precedent that Dr Clifford may exercise his freedom of speech – especially in regard to religious liberty and preaching the Word of God – even if this might cause offence.

The police officer was nothing but polite and courteous throughout, and asked Dr Clifford if he wished to contact a solicitor. Dr Clifford declined, and was then informed that a senior officer would decide whether the complaint should be sent to the Crown Prosecution Service.

A decision has now, in fact, been taken: a senior police officer at the Norfolk Constabulary has got a whiff of homophobia under his nostrils, and the case has been referred to the CPS. The Revd Dr Alan Clifford, BA, MLitt, PhD, Pastor of Norwich Reformed Church, now awaits a decision on whether he will indeed be prosecuted.

I have read these tracts, and there isn’t a word of hate in them. Certainly, they rail rather robustly against the ‘liberal elite’ and ‘politically correct decadence’ (they also have a go at the ‘cowardly churches’). But their overriding message is theological and soteriological, impressing upon the reader that the wages of sin is death and that Christ is absolutely necessary for healing and salvation. Didn’t Christ warn his disciples that people would hate them for bringing such a message? Dr Clifford makes it clear that other violations against the laws of God include fornication and adultery: in the Early Church, he tells us, ‘ex-sodomites sat alongside ex-fornicators, ex-adulterers, ex-drunkards and ex-thieves’. So it was all redeemed sinners together in the kingdom.

But you know how it is: a seared mind will magnify the words and categories which personally offend, and those sentences come crashing over all reason and compassion. Any talk in these tracts of love, comfort, support and prayer is displaced in the peeved mind by ‘perversion’, ‘disorientation’, ‘shameful’ and ‘immoral’. It’s a good job adultery, drunkenness and theft aren’t protected characteristics – there’d be nobody left to preach to.

The curious thing is that there is nothing in these tracts that isn’t written in the Bible and certain sections of the Qur’an. And Pope Benedict XVI, when he was Cardinal Ratzinger, wrote that the homosexual inclination – not merely the act – is ‘ordered toward an intrinsic moral evil’, and so it must be seen as an ‘objective disorder’. Since neither historical context nor dogmatic theology are any longer a defence against causing offence, this statement may undoubtedly be ‘perceived to be homophobic by the victim or any other person’. Forget the fact that the Pope referred to the need for a compassionate response to personal problems and difficulties; forget that he talked about the need for care of the whole human person; forget that he eschewed ‘heterosexual’ and ‘homosexual’ as overriding the fundamental identity as a child of God. The victim will read ‘intrinsic moral evil’ and ‘objective disorder’, and will surely perceive homophobia.

Have we really reached the stage where one may be prosecuted for sending a Papal pastoral letter to Stonewall? If ‘Good News for Gays’ is prohibited by law, then ‘Good News for Muslims’ and ‘Good News for Jews’ must likewise be banned. In fact, Good News for any protected characteristic may be deemed to constitute ‘hate’, so we might as well abandon the pulpits and close all the churches. The gospel may now only be preached safely to white, able-bodied heterosexuals, and you’d better hope that ‘any other person’ doesn’t happen accidentally to overhear.

The Criminal Justice and Immigration Act 2008 contains the offence of stirring up hatred on the grounds of sexual orientation. Anyone using threatening words or behaviour, or anyone displaying, publishing or distributing any written material which is threatening, is liable for prosecution. Former Conservative Home Secretary Lord Waddington won an amendment to an earlier version of the law, which established that no one might be prosecuted for stating their belief that homosexuality is sinful or wrong. It read: ‘For the avoidance of doubt, the discussion or criticism of sexual conduct or practices or the urging of persons to refrain from or modify such conduct or practices shall not be taken of itself to be threatening or intended to stir up hatred.’

But that protection will be illusory for as long as homophobia is defined and understood by the police as ‘any incident which is perceived to be homophobic by the victim or any other person’. Against that background, all mission-orientated Christians will need to temper their proselytism – especially on Gay Pride marches.

Dr Clifford tells me that Huguenot Calvinists are not easily intimidated, and that his faith in God is sustaining him: ‘I am not in deep shock: I enjoy perfect peace,’ he said. Others, of course, may not be so robust and may indeed prefer to pay a £90 fine. Much may depend on the tone and manner of the interrogating police officer.

I confess I used to view with a degree of discouragement and dismay those Bible-bashing Christians with their ‘end-of-the-world’-type placards, preaching fire and brimstone and hell and damnation. I find myself now feeling not much less than contempt for those gays who persecute and prosecute elderly hotel owners and B&B proprietors, or call in the police when they receive ‘Good News for Gays’ in their inbox. It is deeply and profoundly intolerant. They reduce public moral discourse to crass displays of boorish posturing and infantile ethics. For God’s sake, grow up.