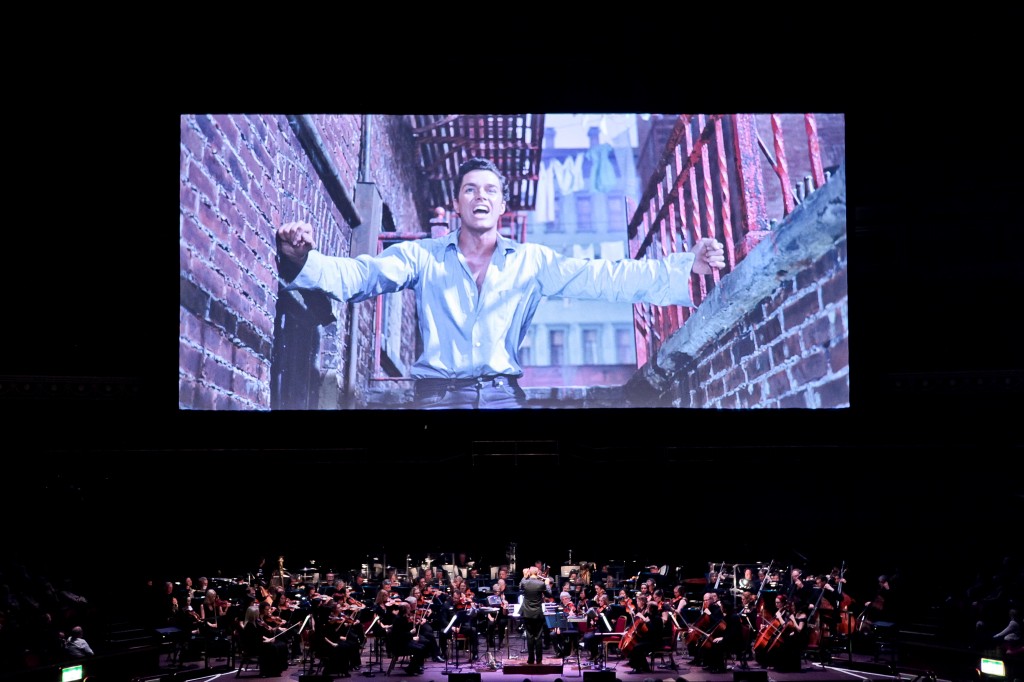 In this techno-cinema-orchestral conjunction, the Sharks and Jets keep all their original vocals and dialogue intact, but (somehow) the musical score has been ‘scrubbed’ – completely excised. This permits the Royal Philharmonic Concert Orchestra (RPCO) to bring Bernstein’s sophisticated score to life in an exhilarating experience. While you’re listening to such legendary showstoppers as ‘America’, ‘Somewhere’, and ‘Tonight’ played live on stage, the eye is captivated by the clarity and crispness now given to Robert Wise’s seminal images and Jerome Robbins’ stunning choreography: the grainy blurs of 1961 have been transformed. It’s a celluloid icon digitalised to theatrical heights: the first meeting of Tony and Maria is especially a masterful moment of re-pixilated pizzicato.

The RPCO has acquired a global reputation for versatility: they’ve played in concert halls, cathedrals, racecourses and train stations, turning readily from Mozart to Liza Minnelli, Beethoven to Bert Bacharach, and Kiri Te Kanawa to Sir Cliff. But in many ways the star of this particular ‘show’ (what category of art-form is film accompanied by a live orchestra?) is the conductor, Jayce Ogren, who got a thoroughly well-deserved standing ovation. For this rendition of West Side Story moves beyond mere musical versatility to absolute mastery of audiovisual synchronicity: every live crotchet and semiquaver has to match perfectly every jot and tittle of Sondheim’s lyrics. And as if that weren’t difficult enough, he then has to conduct the incidental pieces, timing them to perfection for a neat segue into a song or another burst of propulsive choreography.

Ogren not only has to turn the vast pages of Bernstein’s score, but also keep an eye on the elongated video screen before him with its punches of light and colour-coded bars – green, purple, red, white – each with a distinct meaning, which he has to read simultaneously with a click-track in his ear, and then process and dynamically communicate it all to the orchestra through a split-second baton. It’s a fiendish but breathtaking exercise in sensory multi-tasking and tempi-coordination.

But this cinematic concert (that’s what we’ll call it – or cinecon™, for short) also represents an impressive feat of re-orchestration: MGM could easily afford to engage five pianists, five xylophonists, six saxophonists and eight trumpeters for a single day’s studio recording to produce the rich, expansive sounds they needed. But such extravagance is neither economically nor logistically viable for live performance. Full credit for what you hear goes to Garth Edwin Sunderland, who not only performed the necessary forensic archaeology and transcription of every quarter-second of the original orchestrations, but manages (he says in the programme, through ‘a mix of creativity and perspiration’) to completely re-create the film score while pondering such impossibilities as how to cross-fade and fade-out an 85-piece orchestra live on-stage.

Half a century ago, West Side Story won ten Oscars, including those for Best Picture and Best Music: it remains a supreme achievement in the history of film. Now, that legendary cinematography meets the RPCO’s orchestral audacity to breathe new life into the Latin mambo and finger-clicking cha-cha rhythms of one of the greatest movie musicals ever made. It is, quite simply, a moving and beautiful experience.