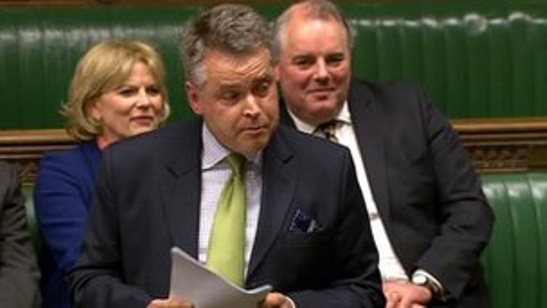 I know more than a few bloggers who have, over recent years, received visits from the police following spurious allegations of Islamophobia, homophobia or racism. Certainly, there are some deeply unpleasant blogs and bloggers out there, but increasingly those who refuse to conform to all the foundational precepts of the equality zeitgeist, or dare to utter a dissonant word against the prevailing orthodoxy, are not merely ‘swivel-eyed’, but often, in the eyes of zealous law-enforcers, just a few increments away from the extremes of political expression. And that expression is, of course, ‘extreme right’.

If you dare to raise a theological or historical objection to same-sex marriage, or remark that those who bombed All Saints Anglican Church in Peshawar were Muslim, or allude to a person’s slovenly appearance and disheveled mode of dress, you risk more than a sharp jab in the ribs from the ever-longer arm of the law.

It was a perfectly innocuous observation of a constituent’s ‘unkempt’ appearance that brought Tim Loughton MP (and his staff) a year of purgatorial harassment and despair. So serious is this grievance that the Speaker permitted Loughton to bring the matter to the floor of the House of Commons last week, and an investigation is now being carried out by the Privileges Committee.

Sussex Police have bizarrely dedicated the best part of a year to investigating and issuing warnings and advice to Loughton on account of a single email he sent to a constituent in which he endorsed the right of his local council to refer to a particularly troublesome resident as ‘unkempt’.

It transpired that this constituent, one Kieran Francis, is (or claimed to be) of Romany Gipsy origin, to whom ‘unkempt’ was a racist expression. And so Loughton was summoned to the local police station and questioned under caution. After half a year of investigation, the case was eventually dismissed, but Loughton – a diligent MP, reasonably concerned for the tax burden of his constituents – questioned why Sussex Police had devoted so much time and thousands of pounds to what, he said, was “an obviously vexatious complaint from a serial complainer”.

This challenge must have irritated Martin Richards, the Chief Constable of Sussex Police, who has now issued Loughton with a PIN – a ‘Police Information Notice’ – for daring to send a copy of a Hansard debate (with a comp slip) to Mr Francis. Loughton has been warned that if he repeats this conduct, he could be liable for arrest and prosecution.

You see, Mr Francis didn’t request any pages from Hansard, and so the unsolicited correspondence from his MP caused him much distress, and this constitutes harassment. Chief Constable Richards agrees. But all Loughton was trying to do was inform his vexatious and abusive constituent that he was no longer prepared to act as his MP, and he sought advice from both the Chief Constable and the Commons’ Clerk on how best to impart this excommunication.

Mr Loughton said the Chief Constable was “singularly obstructive”, while the Clerk was “singularly helpful”. Since any word in a personalised letter might cause unintended offence, a photocopy of a Hansard excerpt sent ‘with compliments’ was deemed acceptable, and this would be protected by parliamentary privilege (and so beyond the sensitised arm of Sussex Police).

It is worth mentioning at this point that Chief Constable Richards also issued Mr Francis with the same formal warning, which is jolly fair and equitable of him.

Mr Loughton and Mr Francis are not exactly Facebook friends. However, Mr Loughton claims that Mr Francis has been spewing “vile abuse” at him, and also to council staff and sundry others. He told a stunned House of Commons: “..they have included doctored photographs of my children (taken from their social media sites) which were eventually taken down, attempted blackmail to put them up again unless I complied with his demands, doctored pictures of the Council Leader’s children regaled with NAZI insignia, vile contorted accounts of my parents’ divorce, forged Tweets, references to my neighbours, photographs of my home, and most recently, a direct Tweet urging me to commit suicide along with assorted lies, made up stories and pure fantasy.”

Sussex Police have not charged Mr Francis. According to Mr Loughton, “he carries on harassing, bullying, stalking, trolling and abusing” him, his family and colleagues.”

Police Information Notices are issued in anti-social behaviour cases. Sussex Police seem content to approve and serve one of these upon their local MP without the recipient having any foreknowledge that a complaint of harassment had ever been made. Mr Loughton was never informed of any investigation and, in contravention of foundational principles of natural justice, was given no right of reply. Rather outrageously, there is no appeal against a PIN, and it remains on file for at least a year.

Mr Loughton told Parliament that DCI Wardley-Wilkins of Sussex Police has now offered him instructions on how he should correspond with constituents without risking a PIN. The tuition fee will doubtless be covered by Sussex taxpayers. But it is not immediately clear how valuable this advice will be, considering they seem to be unable to adjudicate upon that most basic of policing functions – the ability to distinguish between victim and perpetrator.

Loughton concluded: “Mr Speaker, such a sequence of events would offend against natural justice if it were suffered by any of our constituents, but in this case it is an intolerable affront to the rights of this House and Honourable Members to go about their business of representing their constituents without fear or favour. If this goes unchecked, any constituent with a grudge against his or her MP could claim harassment; any Hon Member exposing any dodgy organisation in Parliament could find themselves being questioned by the police and in the case of DCI Wardley-Wilkins trying to tell us how to do our jobs. Indeed, Abu Hamza may have a case against the Home Secretary for being rightly beastly about him in Parliament and find herself on the end of a PIN.”

The police seem to have ever-increasing powers to stop and search, enter premises, seize property, arrest and detain, restrict freedoms, take your DNA, and issue a host of intimidating threats which impinge upon freedom of speech, freedom of religion and freedom of association. You don’t have to be caught in the act of committing an offence: in true Minority Report fashion, you can now be arrested if the police believe they have ‘reasonable grounds’ for suspecting you are about to commit an offence. And the police are, of course, the sole judge of what is ‘reasonable’.

We do not live in a police state, and I repudiate the absurd hyperbole of those who equate any British police force with Mugabe’s henchmen, Putin’s thugs or Kim Jong-un’s secret bowibu. But the Chief Constable of Sussex Police needs a few lessons in the basic administration of natural justice, not to mention tutoring in common courtesy and a crash course in respect for the institutions of democracy.