And don’t think for one minute that the opposition will come only from the Conservatives: many unreconstituted Labour peers and a fair smattering of Liberal Democrats and Cross-benchers are likely to unite in a strategy of filibustering and frustration. There is a determined cross-party consensus among Their Lordships that the case for same-sex marriage has simply not adequately been made.

Having passed through the House of Commons with a sizeable majority, David Cameron won’t want his pet modernisation policy – the nexus of his Tory detoxification project – to be frustrated in procedural ping-pong between the two chambers.

He could, of course, invoke the Parliament Act to force it through the House of Lords, but such a course would be fraught with dangers – not least because the policy was not in the last Conservative manifesto (an equality codicil is not adequate disclosure); it was not in the Coalition Agreement; it was not included in the Queen’s Speech; there was no Royal Commission on Marriage; no methodologically valid consultation (anybody anywhere in the would was able to contribute -muliple times, if desired).

There was no Green Paper, no White Paper, and now we know that more than half the Parliamentary Conservative Party oppose it. It is nothing but a prime-ministerial whim, which 70 per cent of his own backbenchers felt they could not support.

The only apparent political strategy remaining is for the Prime Minister to indulge in a little parliamentary gerrymandering: tweaking the make-up of the House of Lords in order to facilitate the passage of the Bill. And by ‘tweaking’, I mean bunging in another 50-or-so Notting-Hill-centric loyalists, who will then owe their patron such a debt of gratitude that their compliance will be without question.

The rumour mill is in full-swing that an announcement to this effect is imminent (the appointment of more peers, that is: not an admission of gerrymandering).

Since House of Lords reform was scuppered, the number of peers has been virtually frozen for fear of more bad blood and puss seeping out of the still-raw wounds of the Liberal Democrats. It is true that the red benches are heaving with excess ermine (more than 800 of the fur-balls, as against 650 MPs). But such chronic overcrowding is a minor consideration when it comes to enacting the Prime Minister’s political will.

Cameron is likely to elevate favoured donors, toadies, senior volunteers and a few more bright new things. Some of these will have been party members for five minutes; a few might have delivered the odd leaflet or made an occasional speech. But, despite 40 years of contending for the Conservative cause, I doubt that Ann Widdecombe is likely to be among the chosen ones. She is not known for her loyalty to Cameron or, indeed, for her fondness toward the Coalition’s broad social agenda. She has, as ever, been characteristically forthright in expressing her view that the Prime Minister is ‘very misguided’ and ‘doing a lot of damage to the party’. So it would be stretching faith a little beyond consubstantiation to believe that he might include Widdy in the never-ending peer show.

I received quite a bit of correspondence following last week’s post on this matter, including a copy of the congratulatory letter which the Prime Minister sent to Ms Widdecombe on being awarded her papal damehood. (The letter was not, I wish to emphasise, sent to me by the lady herself). You will see that it speaks eloquently of the honour being ‘richly deserved’ for the ‘tremendous contribution’ she has made to public life ‘over so many years’. She is told to feel ‘justifiably proud’ of her many decades of achievements.

Apologising that he couldn’t be present at the ceremony in person, the Prime Minister wished it to be known that he was with her ‘in spirit’, and that both he and Samantha sent their ‘love and warm wishes’. Significantly, he paid tribute to her enduring popularity within the Conservative Party and, indeed, ‘all sides of the political divide’: 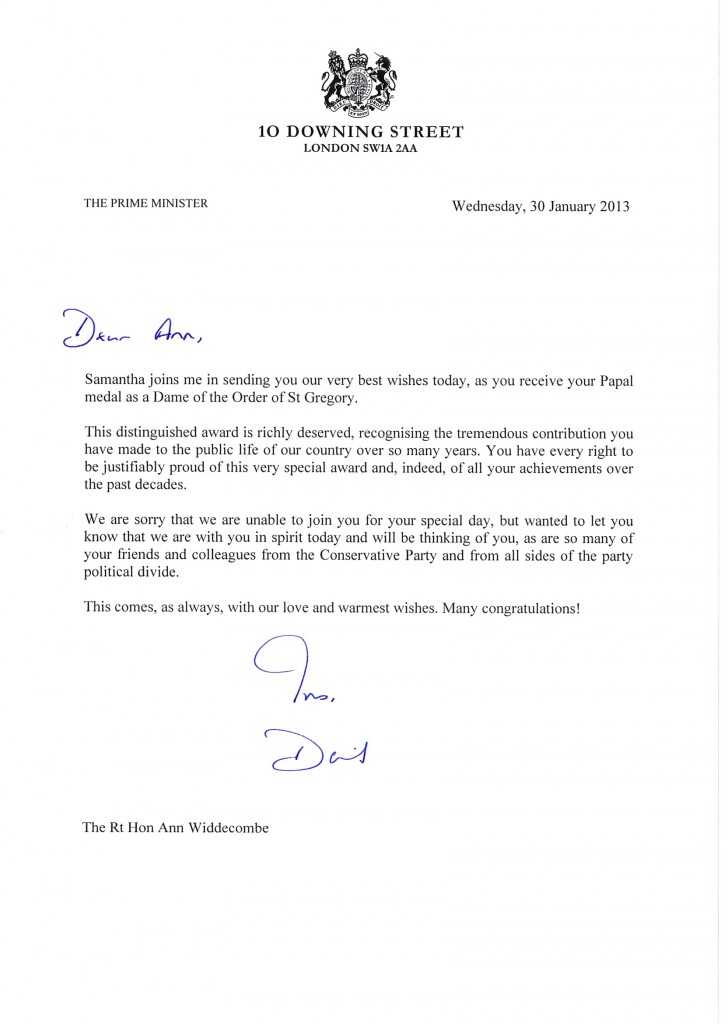 Tell me, what manner of love is it which writes in such glowing terms of character integrity, national contribution and personal achievement, but refuses to remedy the most blatant honours injustice since Diana was stripped of her HRH?

This letter is not merely one of superficial congratulation on being awarded a papal trinket: it is a weighty political commendation which alone – for many – would be sufficient to justify elevation to the House of Lords. I am told that other supporters of this campaign include Sir John Major, Lord Alton, Cardinal Cormac Murphy-O’Connor, and former Archbishop of Canterbury Lord Williams of Oystermouth. I’m sure if I dig a little deeper I could uncover a few more.

It is curious that these discerning politicians and eminent clerics can recognise the overwhelming case for Baroness Widdecombe, but David Cameron cannot. Unless, of course, the Prime Minister simply didn’t mean what he wrote.