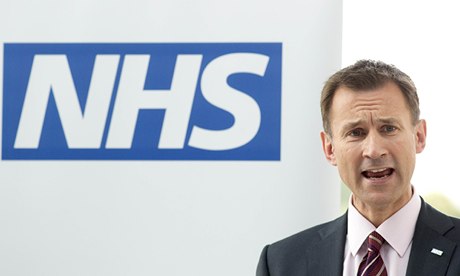 Jeremy Hunt was answering Health Questions in Parliament last week, and on the matter of access to GPs he disclosed: “I took my own children to an A and E department at the weekend precisely because I did not want to wait until later on to take them to see a GP”.

Now, it may be that the Secretary of State was acting quite naturally in the best interests of his children. It would be quite wrong to pry into the personal circumstances of Mr Hunt’s visit to A&E, or to conjecture about the nature of the accident or emergency which had befallen one (or both) of his children.

But the words he chose to use give the distinct impression that this was neither an accident nor an emergency: he didn’t say “I could not wait until later on to take them to see a GP”; he said “I did not want to…” These words are consistent with the visit having been one not of necessity but of convenience.

Even if we allow a little rhetorical latitude for an inadvertent bout of literal repartee, or even the defence that he ‘misspoke’ (though he hasn’t claimed such), if there had been a genuine accident or the need for emergency attention, is it too cynical to expect the Secretary of State to have used the opportunity presented by Health Questions to praise the expertise of the doctors and laud the professionalism of the nurses – ‘best in the world’, and all that? Shadow Health Secretary Andy Burnham permitted no such latitude. He swiftly tweeted: “If all ‘unwell’ people went to A&E, #NHS would collapse. Surprised you continue to contradict official advice. Irresponsible.”

To which Mr Hunt tweeted a terse response: “If parents have an unwell child needing medical attention, A&E provides a trusted service.”

The first law of holes…

The NHS pledges to provide services at a time that’s convenient for you.

Outside normal surgery hours you can still phone your GP surgery, but you’ll usually be directed to an out-of-hours service. The out-of-hours period is from 6.30pm to 8.00am on weekdays and all day at weekends and on bank holidays.

If it is not an immediate emergency then call NHS 111. NHS 111 is available 24 hours a day, seven days a week…

But the Secretary of State mentioned neither of these services. Indeed, he gave the distinct impression that GPs are simply not accessible out-of-hours at all. He went to A&E over a weekend because at least one of his children was “unwell”, and he “did not want to wait until later on to take them to see a GP”.

A&E is, as the initialism suggests, for accidents and emergencies, not for anything and everything. When the Secretary of State for Health gives the impression to Parliament and to the general public that he took his children to A&E over a weekend because he didn’t want to wait for a GP appointment, why are the rest of us bothering to endure our sufferings for a week or a fortnight? A&E departments are great for major trauma, but GPs are far better for run-of-the-mill paediatrics. It’s their bread and butter. And they’re not only available at weekends, but nights, bank holidays, Eid, Rosh Hashanah, Diwali and even on Guru Nanak’s Birthday.

I’m loath to agree with Andy Burnham, but surely, with winter NHS pressures upon us, we shouldn’t be clogging A&E departments with our children’s coughs, colds or colic. If a child is “unwell”, the first port of call is your GP’s ‘Out-of-hours’ service and NHS 111. For the Health Secretary to give the impression that A&E is for routine primary care is, at the very least, irresponsible, if not medically mistaken and politically misguided.