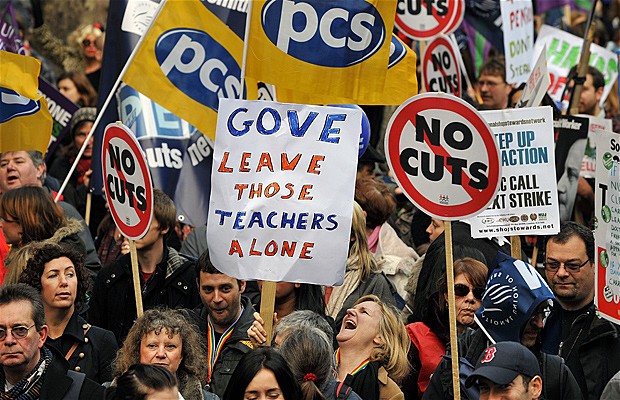 As the Socialist Worker alliance of teaching unions continue their disruptive ‘work-to-rule’ policy in schools, I see they are now agitating for further strike action. It has been announced that the comrades will walk out (again) and abandon their students this summer and autumn in protest at Michael Gove’s education reforms. We’re more than acquainted with NUT hyperbole and disinformation when it comes to the Government’s education policy, but I am intrigued by a contentious letter in The Independent on this subject which has been signed by more than 100 academics.

These eminent professors and teachers of education write on behalf of some of the nation’s most prestigious centres of learning. They are seemingly persuaded that the proposed reforms to the National Curriculum will damage education standards because the tedious focus will be on ‘endless lists of spellings, facts and rules’, spiced up with a dirge of ‘rote learning without understanding’.

The demands on children, they aver, will be ‘too much too young’. The arid emphasis will be on a myopic ‘mountain of data’ which ‘will not develop children’s ability to think – including problem-solving, critical understanding and creativity’.

One wonders how many of these academics – some of whom I know – have ever sat in a real classroom and delivered real lessons to real students (and I’m not talking about university-based PGCE teacher-training courses). Thousands of schools and teachers have adopted the knowledge approach to learning, and it places more emphasis upon epistemological issues than any trendy ‘creativity’ approach.

Under the Gove reforms, children will be taught English with more emphasis on spelling, punctuation and grammar. In Maths, they will know all their times-tables (2-12) by the age of nine, followed by algebra and geometry by the age of 11. What could be wrong with this?

The fact that these distinguished professors take primary issue with ‘lists of spellings’ really says it all.

What is English if it is not the correct usage of words? What are these words if they are not correctly spelt? What are sentences and paragraphs if they are not correctly punctuated? What is history if it is not discerning facts? What is maths if it is not addition, subtraction, multiplication and division? These are the fundamentals; the foundations of future learning construction. Understanding is not inhibited by these emphases; it is enhanced. A misplaced or omitted comma can change an entire meaning.

I have lost count of how many A-level students and undergraduates – yes, undergrads – whose work I have read or assessed, do not know how to use commas. Some 18-year-olds begin their degree courses not knowing the difference between ‘their’, ‘they’re’ and ‘there’; or ‘effect’ and ‘affect’; or ‘practise’ and ‘practice’. I could forgive them for not knowing the subjunctive (just), but some experiences of secondary education clearly leave many teenagers quite ignorant of even basic levels of literacy and numeracy.

And some of these want to become teachers.

But you won’t find many university PGCE tutors who are overly bothered by such trivia as spelling, punctuation and grammar. As long as trainee teachers leave their courses with a firm grasp of certain ‘social facts’ and an awareness of the cognitive perspectives of Marx and Weber, it’s a job well done. As long as they learn correctly about ‘stakeholders’, ‘targets’, ‘deliverers’ and ‘clients’, the learning-teaching process will become a blissful partnership of mutual community.

The academics blurt out that ‘inappropriate demands will lead to failure and demoralisation’, seemingly oblivious to the fact that the chronic failure of many LEAs has not only demoralised generations of children; it has reduced teaching to a mind-numbing series of acronyms: PGCE, GTP, QTS, NQT, GTCE, HoD, CPD, SLT, NPQH – for those who have ears, this is the state conveyer-belt of cloned teacher production.

The proposed new curriculum is actually far less prescriptive than all previous versions: Gove has cut the state’s formulation by about 50 per cent, leaving more space for headteachers and governors to decide what is right for their schools, and far more room for teachers to experiment and explore. This is devolved power: it is trusting the profession more. Far from being ‘narrow’ or representing the ‘dumbing down’ of teaching and learning, it grants more intellectual freedom for teachers to broaden their sources of knowledge and explore pedagogical innovation.

Michael Gove isn’t making this stuff up: he’s not pulling curricula rabbits out of an elitist top hat in the random hope of improving standards of attainment on a wing and a prayer. Education which focuses on knowledge and the ways of knowing is considerably more interesting, engaging and fulfilling for the student, and there is a considerable body of evidence to support this view. Gove isn’t advocating a one-dimensional ‘rote learning’ process, as the academics pompously dismiss it; he is keen to improve standards by focusing on apprehension, understanding and meaning. Knowledge permits children to distinguish fantasy from reality and subjectivity from objectivity. Only when they have trained their brains to retain important facts can their memories be effectively deployed in the resolution of problems – scientific, historic, linguistic, sociological or philosophical.

These 100 academics appear numerous, authoritative and ubiquitous. But, like the agitating teaching unions, they represent a hard core of political ideologues. If they’re not actually members of the far-left Socialist Party, they’ll be in complete sympathy with the dogmatic aims and objectives of the Socialist Teachers Alliance (is that Teacher’s or Teachers’?). Many of them sit in their professorial suites sipping Fair-Trade coffee while poring over Marxism Today. They still curse the name of Margaret Thatcher (especially at Oxford) while praying (in a secular-humanist neutral kind of way) for the return of Old Labour.

On that point, Professor John Furlong of the Department of Education at Oxford – one of the signatories of the letter – was recently accused by a former student of ‘organising a left-wing power base’ within the department. The letter of complaint has been circulated far and wide. I might have dismissed this as ill-informed histrionics had I not experienced something of his perception first-hand. 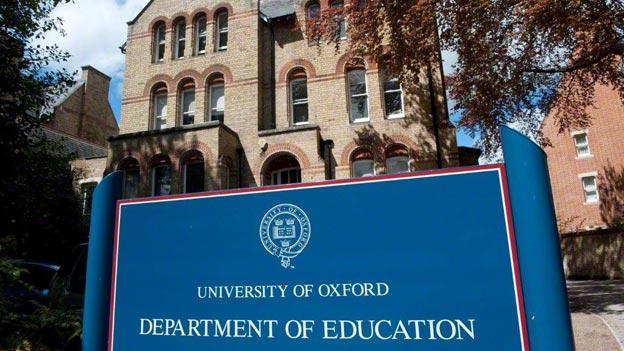 It was attended by about 120 academics, headteachers and educationalists. Professor Pring began his presentation by telling us that Michael Gove has given us ‘the most centralised system of education in Western Europe since Calvin’s schools in Geneva in the 16th century’. He added, rather ominously: ‘And we ought to be frightened.’

With a swipe at the Reformation – probably because it’s puritanical, narrow, bigoted and ‘right-wing’ – this eminent Oxford professor, a former director of the department, has no apparent awareness of the authoritarian or totalitarian systems of state education under any European fascists of the last century.

Perhaps he thinks Hitler devolved the curriculum to Jewish schools; that Mussolini permitted teachers to assess his policies by political arithmetic; or that Franco liberated Spanish education with a syllabus of human consciousness free from all presuppositions.

There was no apparent understanding of Gove’s programme of subsidiarity, devolution, localisation or of realising Burke’s ‘little platoons’. There was no appreciation of the fact that the abolition of unaccountable, meddlesome educational quangos like the QCA actually strengthens democratic accountability, because it restores authority to the Secretary of State who is accountable to Parliament, and Parliament is accountable to the people. When a quango is left to develop the National Curriculum and all associated assessment, tests and examinations, how, precisely, does one hold the body to account?

But Pring is firmly of the view that if we want ‘education for all’, we cannot have such power in the hands of the Secretary of State, and neither can we have autonomous and competing schools. These reforms, for left-wing academics, are antithetical to any notion of cohesive state education.

When, at this same seminar, Professor Sally Tomlinson was introduced to speak under the heading ‘Ignorant Yobs’, the chairman quipped: ‘Is that the Government?’ This, I remind you, was in the Department of Education at the University of Oxford.

Her presentation (Powerpoint) concerned dysfunctional families, and she informed us that Iain Duncan Smith ‘is actually quite good at referring to people who shouldn’t have children because they’re different from the rest of us and aren’t able to function properly.’

Is he? Is this what he said? Is it what he meant? Is this really the reasoned assertion of an evidence-based inquiry, or the hysterical Conservative caricature propagated by the ideological hard-left which dominates the academic world of education?

During the course of the evening we heard that neither Kenneth Baker nor Margaret Thatcher were capable of comprehending diversity in the population – they simply could not grasp the basic mathematical principle that half the population will always be below average. The audience sneered and sniggered right on cue.

One headteacher tried to interject, telling both Pring and Tomlinson that they are ‘slightly removed’ from the everyday reality faced by many teachers. And he dared to argue in favour of Gove’s reforms because much of what has happened over recent decades, he said, ‘could be classed as failure’. I bit my tongue and bottom lip as his measured and reasoned interjection was dismissed outright, with alarming calls to action to fight against ‘the silly things that Gove is doing’.

But it got worse, by far. The most pernicious disinformation (or lie) that was communicated at that seminar was Tomlinson’s tirade against Lord Adonis. She told us – purporting to quote from Adonis’s book Education, Education, Education – that he wanted ‘to root out the cancer of comprehensive education’. She reiterated her point by telling us that ‘he actually says this in the book’. And she went on to accuse him of ‘not only insulting young people but whole schools’, followed by a rallying cry to the troops to instigate a campaign ‘to get round the current hegemony’.

I have not only read Adonis’s book; I reviewed it. He says nothing disparaging at all of the ideal of comprehensive education. Indeed, he’d hardly have made his Academies non-selective if he thought the educational basis was not only flawed, but malignant. His ‘cancer’ reference was very clearly made in the context of chronically failing comprehensive schools.

I wrote to Professor Tomlinson, very politely pointing this out. She responded that she had no time to give supervisory sessions (which I hadn’t requested). I wrote again asking why she had apparently misled her audience, but I received no further reply. These are facts, you see. And doubtless I’m a dangerous ‘neo-liberal’ and part of the ‘current hegemony’.

I did dare to ask a question at the end of the seminar, but I foolishly prefaced it with a disclosure that I had been an Opposition adviser to Michael Gove. I’m not joking when I say there were audible hisses. The point I tried to make – about the apparent emerging educational consensus among all three main political parties – somehow got conflated by Professor Pring with the brave headteacher who dared to mention ‘failure’, and so I was drowned in a wave of anti-Tory, anti-Gove, anti-Thatcher invective.

The moment you move from peer-review, much of the academic educational debate around political policy seems to take place in a censorious atmosphere of intimidation, conducted in accordance with the foundational principles of pantomime. I’ve spoken to some very senior politicians across the board – from all three main parties. I can assure these academics that they all want the same thing – to improve standards in education. None of them desires to ‘root out the cancer of comprehensive education’.

So, let’s stop the superficial slander and caricature. It might be entertaining slapstick for the gallery, but I’m at a loss to understand how misinformation, disinformation or partisan posturing make any credible or constructive academic contribution to the national education debate.

8 thoughts on “The malignant left-wing pathology of educational academics”