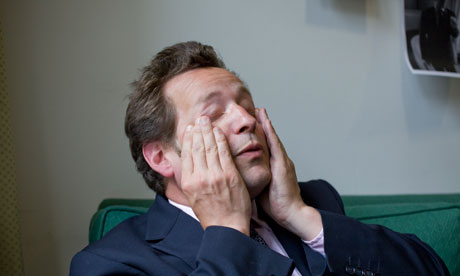 Rationing Mammon emaciates the Muses. Plato knew it, and so does Polly Toynbee: it’s just simple cause and effect. And government cuts tend to be cyclical: seven fat years of abundance are invariably followed by lean years of famine. Unlike health and overseas development, the arts seem to have no divine right of exemption from the fiscal straitjacket presently being strapped around other departments of state: it is undeniably politically easier to cut Northern Ballet than hospital beds or malaria nets. But the suggestion that a reduction of £150 million amounts to little more than a slight nip‘n’tuck in a very fleshy sector is a little misleading. Certainly, there are savings to be made in the labyrinthine, pathologically-left-leaning quangocracy which generously bestows public money more in proportion to political correctness than artistic merit. But, my goodness, we need to be a little careful before we equate the RSC with a bloated BBC; the LSO with the inefficiencies of the NHS; our museums and galleries with otiose Harrier jump-jets; or the local school film club or drama group with rubbish collection and pot-hole filling.

The nation’s culture transcends issues of politics: art has the capacity to unite the disparate hopes and disjunctive dreams which exist in the perpetual divisions between man and man. In the political pursuit of social harmony and the spiritual quest for inner peace, there is perhaps no greater cause for the common good worthy of investment. There is a corroborative quotation circulating the internet which tells that during the Second World War, Winston Churchill’s finance minister said Britain should cut arts funding to support the war effort. Churchill reportedly retorted: “Then what are we fighting for?”

This is fantastic, true-blue Tory red-meat support for maintaining the level of arts funding in the face of national crisis: if we can sustain the subsidy through war, what’s a little national debt and an inconvenient cash-flow problem? But I checked the veracity of this attribution with the Churchill Archives at Cambridge University, and it transpires that the great man never said any such thing. And neither did Margaret Thatcher, which is probably why the writers of the musical Billy Elliot seem to want her dead. There is a perception – however unjust – that Tories are basically Philistine.

Ever since Macbeth became associated with bad luck, the great actor-managers – those with one eye on the First Folio and the other on the box office – have long known that the superstition was less to do with witches, spells and incantations, and more to do with the economic reality that a popular play packs in an audience and settles a company’s debts. Macbeth is almost invariably a commercial success, whoever plays the Thane: Henry VI Part 3 is not, unless he who plays the King recently appeared in Coronation Street. And even then it’s an economic struggle, unless Queen Margaret gets her kit off. If great works of art are to be perpetuated and experienced by future generations, the conclusion to the debate over state subsidy of the arts ought to be foregone.

But for many Speccie readers – not to mention the Institute of Directors and the Adam Smith Institute – it evidently isn’t. And Ed Vaizey is more manager than actor; more accountant than artist. He helpfully provided an array of figures and statistics, and reassured us that the contraction of arts funding by ‘just £150 million’ amounts to ‘just 11 per cent’, and that free admission to our national museums will continue, with their grant falling by ‘just 15 per cent’. What is the self-satisfaction with this ‘just’? Is it morally right or well-grounded to talk of ‘barely’ or ‘no more than’ when cuts of 11-15 per cent will mean the curtailing or diminishing of around 200 worthy artistic projects which in turn will mean the pruning or complete snuffing out of some very talented artists?

Still, we’re all in this together.

And there is undoubtedly something in the observation that state funding has produced a bland, monochrome or monotonous, almost Stalinist uniformity in the national artistic expression (where are the ‘right-wing’ plays, playwrights, poets or theatre directors?). In a centralised bureaucracy, cultural diversity is diminished and creativity atrophies because it is sustained by the state instead of being sympathetically euthanised by the market. I’m not unsympathetic to the Tory dilemma: really, I’m not. Arts funding is a little like the British Constitution: if you were starting from scratch, you certainly wouldn’t begin with the existing formula. But a revolution to unscramble this dog’s breakfast risks disastrous, unintended consequences, potentially every bit as seismic as those which New Labour have wreaked upon the Constitution. Reform, as Burke posited, must be incremental and gentle, not least because with the arts you are treading on people’s dreams. I think Ed Vaizey understands this, even if he’s loaned his artistic soul to the coalition’s Faustian funding pact.

Politicians tend not to create art. Of course, there are notable exceptions, like Disraeli and Churchill (and Michael Dobbs), all of whom were (or are) commercially successful. But not all art brings home the bacon, especially if it’s a Damian Hirst dissected pig suspended in formaldehyde with quotations from the Quran tattooed into its ham. And for the state to subsidise, someone somewhere must assess the merit or virtue of Tracey Emin’s enseamed bed, and they won’t all be as discerning as Aristotle or Charles Moore. To those who say the market should decide, I ask you where Mozart would have been without Emperor Joseph II, or Beethoven without Archduke Rudolph? And let’s not forget that this was the era when emperors and dukes were the state: it was the taxpayers of Austria who subsidised The Marriage of Figaro and sponsored the Missa Solemnis. Before these it was the Church which commissioned the great works of art, and that was when the Church was the state in a ‘Big Society’ kind of way.

The actor will know that art is not an escape from the tedium of the world: it is a reflection of our real nature, our virtues and our conceptions of truth. Culture is not something to be played like a pipe: it embodies and sustains our values, and resides at the very centre of our national purpose. The manager will know that state subsidy of the arts amounts to 17p per person per week: for every £1 the Government invest, up to £15 is generated; and about two million highly-skilled people are employed in the field, all paying income tax and National Insurance. Perhaps the Government need an arts minister actor-manager who appreciates that art is the life and soul of the nation. Given the tens of billions which the sector generates from tourism alone, I’m not entirely clear what is to be gained from an 11 or 15 per cent cut. You can’t magic philanthropists out of hat to fill the void: the private sector needs coaxing and nurturing over decades, and the whole culture of arts funding needs to change to encourage and inspire such generosity. The Budget change in the rules relating to inheritance tax was a start, but waiting and hoping for people to die is a bizarre way of inspiring them to fund creativity.

There are evidently many on the right who are implacable in their view that arts subsidy should give way to cultural commercialism and artistic philanthropy, to save the taxpayer having to fork out for the indulgent pursuits of the élite or the pretentious perpetuation of the avant-garde. But populism is a crass measurement of artistic virtue: Macbeth may be a better play than Henry VI Part 3, yet it would be a tedious repertoire indeed which had to stage it in every season – with or without a telegenic soap star – in order to balance the books. Still, Ed Vaizey will probably move on to Transport next year. And he’s a likely shoo-in at the Treasury the year after. Sir Humphrey will be happy as long as funding for the ROH remains as inviolable as that for health and overseas development. But the people won’t be happy just watching repeats of Macbeth year after year. And they will get mighty sick of Hamlet if it can only ever be staged starring the latest Dr Who.